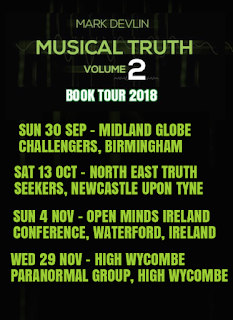 THE SECOND SUMMER OF LOVE, 30 YEARS ON

30 years ago this month the ‘Second Summer of Love’ was in full swing. Just how natural and spontaneous it all was, versus something planned-for and executed by Establishment forces, remains open to debate for any genuine truthseeker.

Please e-mail any questions for the upcoming Q&A to markdevlinuk@gmail.com

Posted by Musical Truth Book at 17:48 No comments:

David Icke goes in on the 60s counter-culture, the late Dave McGowan’s Laurel Canyon work, LSD, Leary, Jim Morrison and his dad, establishment/ CIA links, etc, in his videocast of this week.

Obviously he’s a little late to the party, and many will claim he’s biting off the work of others. But I’ve always been of the view that it doesn’t matter what method important information is delivered by, (so long as it’s accurate,) - the important thing is that it gets out there at all. Icke has a huge listenership which is now going to be fully aware of how this social-engineering op was pulled off, and be on their guard for future agendas, since the template has been used so many times since. That, to me, can only be a positive thing.
Posted by Musical Truth Book at 05:02 No comments:


I’ll be taking a bit of a break from radio and podcast interviews from next month. I’ve done around 25 so far this year, most of them two hours long, and it gets mentally and emotionally wearing to keep up this kind of pace after a while. I have other projects that I need to find some time for, and I’ve neglected my own ‘Good Vibrations’ series, which needs to be put right.

Here’s one of my last for some time, therefore - a re-appearance on Mysterious Radio with host K-Town. Lots of music industry shenanigans get discussed here, particularly the whole science of sound, and manipulations that can be achieved through the weaponisation of sound frequencies. It was a good one.
Posted by Musical Truth Book at 00:31 No comments:

It was a very useful experience to guest on Alan Burton’s ‘Truth Health Freedom’ podcast recently, as he got me to delve into some spiritual and metaphysical areas as a welcome departure from the usual music industry material that I deal with. It was very much a soul-searching excursion. Here’s the resulting audio:

Posted by Musical Truth Book at 05:44 No comments: